Ira Khan is in awe of her father, Aamir Khan, after watching an old video where the actor is seen doing a big chest workout. The video dates back to when Aamir was preparing the 2013 film Dhoom 3.

Ira Khan is in awe of an old video of her father Aamir Khan training.

There is no denying that Aamir Khan is a perfectionist and he gives himself 100% for every role he plays. The actor trained a lot for his 2013 film Dhoom 3 and we have proof of that. An old video of Aamir performing the ‘alternative dumbbell hanging press’ while making Dhoom 3 was shared by an Instagram account called Poznic Training and it impressed his daughter Ira Khan.

An old video of Aamir surfaced on Instagram where he is seen training with dumbbells in his hands while his upper body is suspended in the air. The video dates from when the actor was preparing for Dhoom 3. Poznic Training, who describes himself as Aamir Khan’s personal trainer for Dhoom 3 and PK, shared the video on Instagram. Sharing the video on her Instagram story, Aamir’s daughter Ira Khan wrote: “What’s this exercise? (sic) ”. 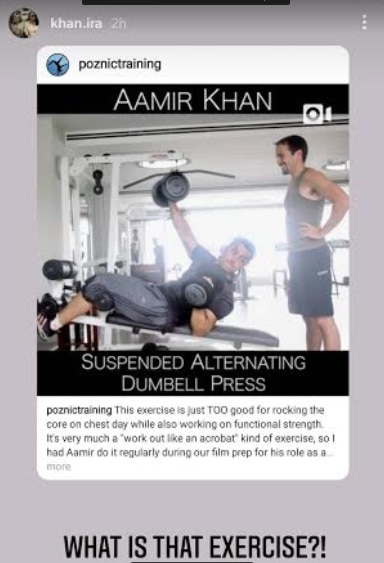 Ira Kha, who is dating fitness trainer Nupur Shikhare, is also an avid fitness enthusiast. She often shares videos and photos of herself training with her boyfriend. Recently, she revealed that she is learning kickboxing from Nupur. Sharing the video, she wrote: “Kickboxing is clearly not my thing. What are my arms doing ?! Also … dropping Popeye is clearly not my thing either #fail #firstclass #surpriseattack ( sic). “

Ira Khan and Nupur Shikhare were recently in Himachal Pradesh. The couple shared several posts from their trip where they can be seen playing with puppies, biking, climbing mountains and spending time in a quiet cafe, among other things.

Aamir Khan, meanwhile, shoots for Laal Singh Chaddha, which is the Hindi remake of the Hollywood film Forrest Gump. The actor recently shot for the film in Kashmir and Ladakh. The film also stars Kareena Kapoor in a central role.

Click here for IndiaToday.in’s full coverage of the coronavirus pandemic.